We love the LGBTQ world and all that it implies, we recently talked about the influence of Generation Z on this collective. Today we want to talk about the different LGBTQ flags and their meanings!

These are the LGBTQ flags you must know

The colors in the different flags of the Gay and Queer community represent different genders, sexual orientations, and identities to which people feel connected.

We are going to see all the flags and what they represent. Surely you have always seen different colors or have wondered about the meaning of each color, keep reading!

This is the original flag for the gay movement. It was thought in 1978 by Harvey Milk, the first official of California who declared himself a homosexual person. He asked Gilbert Baker to create a flag to represent Gay Pride.

This first 8-color flag in horizontal stripes was the first to be paraded through the streets of San Francisco in the 1978 Pride celebrations. And do you know the meaning of the different colors?

This flag contains the same design as the original, and it’s intended to represent the Pride community. It’s the flag that is usually used in demonstrations, and it’s the main flag for gay men.

It symbolizes the entire LGBTQ community in general and is the one that you will have seen the most on the streets! Some commercials and restaurants even use this flag to communicate the defense of the fight.

Have you ever seen the LGBTQ flag with the colors brown and black? So, it’s this one! And represents black and brown people who are within the community. It was created in 2017 by the Tierney agency and although it had some criticism, it was a success. It’s also called Queer People of Color.

Created in 2018 by Daniel Quasar. With this flag that has a triangular shape on the left side with the colors white, pink, brown, and black, he wanted to represent the Philadelphia Pride Flag and the Transgender Pride Flag!

The bisexual flag contains the colors pink blue and purple, which represent different things. It was created by Michael Page, who wanted bisexual people to feel represented by a single flag as well. Do you know what the colors mean?

This flag consists of the colors yellow, pink, and blue. The objective of this flag was to separate the bisexual collective from the pansexual collective, so there would be no confusion between their meanings.

Unlike bisexuals and pansexuals, polysexual are attracted to multiple genders but not all, and that is what this flag wants to represent. It is made up of green, blue, and pink stripes.

As you already know, asexuality is not feeling attraction to any particular sex. The flag was created in 2010 to raise awareness of the existence of this type of sexuality and claim that there is no problem with it. It contains the following colors:

It’s a black, white, purple, and gray flag that represents a part of the asexual community, specifically the demisexual part. It contains a triangle on the left and three lines of white, gray, and lilac, the same as the asexual flag.

This flag was designed by Morgan Carpenter in 2013, and represents those people who feel that their bodies don’t represent the gender of men and women. Many people can have, for example, male and female genitalia. In other words, intersex people are represented.

The flag contains a purple background with a yellow circle on the centerboard. The circle means that we all have the right to be complete.

It was created by a transgender woman in 1999, Monica Helms. Represented with 5 lines, pink and blue and one white in the middle, she wants to represent that we are all looking for the best corrections and improvements for our lives.

Do you know the queer gender? They don’t like to behave as socially accepted because of their gender. The colors are the following:

Banner with pink, white, purple, black, and blue lines. This flag represents the genderfluid community, and the goal was to differentiate this community from the genderqueer community.

It’s a green, white, gray, and black flag that represents people who have little or don’t have a romantic attraction to others. 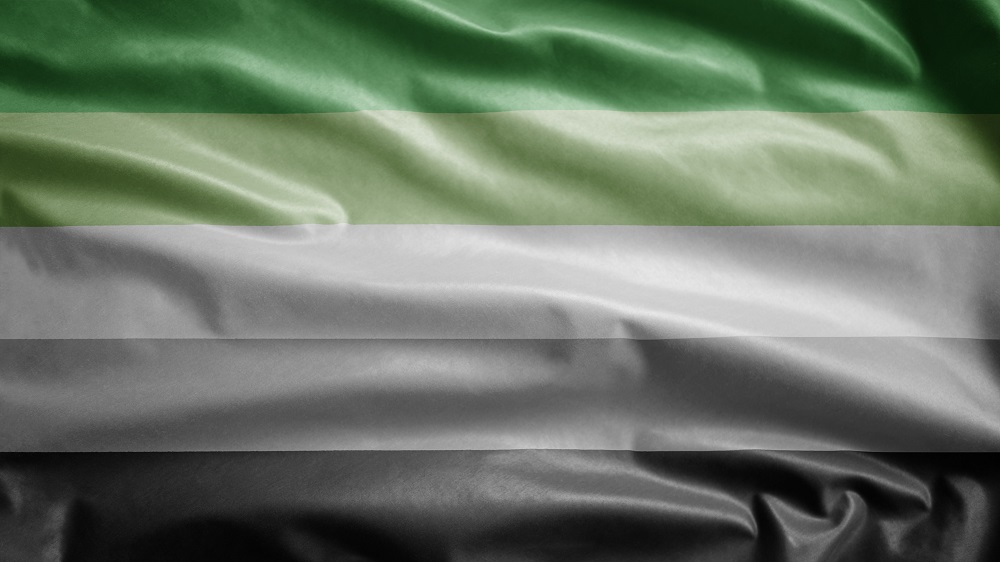 Created in 2014 by Kye Rowan. There were a lot of non-binary people who didn’t feel represented by the genderqueer flag, that’s why this one was created. They contain the following colors:

Those people who have different partners at the same time, or emotional connections with several people, are represented in this flag. That is why apart from the three lines of blue, yellow, and black color, it contains the pi symbol in yellow right in the center.

This flag celebrates the sexuality of others. It contains black and white lines and an A with rainbow colors in the center.

The pride flag has changed over time in order to fairly represent each part of the community, and this year another design has appeared!

Changes were made by Valentino Vacchietti, who added a circle over a yellow stripe. There are different triangles in the left area with these colors: yellow, white, pink, blue, brown, and black. Then you will find the habitual horizontal lines of red, orange, yellow, green, blue, and purple. These are the meanings of them:

Although there is only a black stripe on the flag, the black also represents all the lives that were lost in the community to HIV and the stigma that still continues around this disease.