The Oscars are undoubtedly one of the great events of cinema worldwide, and it is a great appointment for all movie lovers. The 2021 Oscar Awards ceremony was held on Saturday, April 25 and again, it was a gala marked by the pandemic produced by Covid-19 where of course, sanitary measures were present throughout the night. The capacity had to be reduced and the masks were part of the outfits of the famous as one more accessory in their look.

As we anticipated in our previous article on the Oscars of 2021, despite the setbacks that all the filmmakers have had to adapt to, great films have been created. If you missed this great night, do not worry because we will review who were the big Oscar winners and which were the great moments of the gala.

Who were the winners of the Oscars 2021?

Despite being a different gala, at the 93rd Academy Awards ceremony, we were able to enjoy great moments. Next, we will comment on the most outstanding winners of the gala.

If we have to say who was the big winner of the Oscars, we can certainly say that Nomadland took the big prizes. This year, the bets were right and Chloé Zhao has made history by becoming the big winner of the night. Chloé Zhao made history by winning the Best Picture and Best Direction award obviously for her great film Nomadland through which she portrayed contemporary nomads in a humanistic way. Even so, and despite these great awards, Zhao stood out and became the true winner of the Oscars since she has become the second woman and the first Asian woman ever to win these awards. In addition to Chloé Zhao, Frances McDormand won the Oscar for Best Leading Actress for her performance in this film. This way, McDormand has won her third Academy Award in the category of Best Actress. 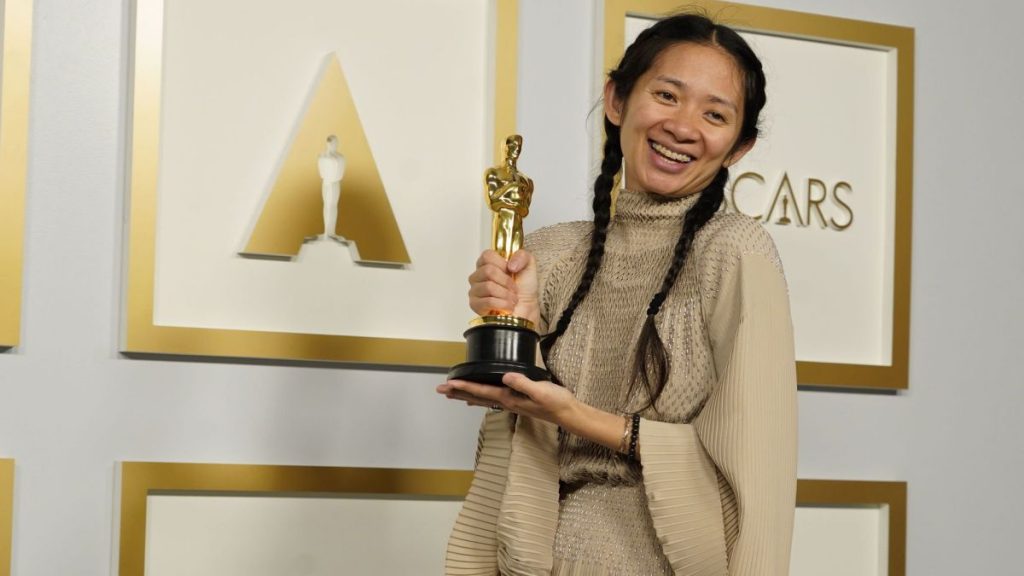 Although Nomadland was one of the great protagonists of the night, it is important to mention that other films also stood out, such as Mank, which won the Best Photography Award as stated by the guild. Another big surprise of the night was Anthony Hopkins who won as Best Actor, over the nominees’ Riz Ahmed, from the movie Sound of Metal, the late Chadwick Boseman, who has collected many awards this season for his performance in Ma Rainey’s Black Bottom. Hopkins won his second Academy Awards for his part in the film The Father, in which he is an aging man with dementia.

Best moments of the Oscars 2021

In a gala like the Oscars, it could not miss funny, emotional, and vindictive moments. It is for this reason that we will now comment on the best moments of the Oscars 2021.

The great moment of Youn Yuh-jung

We could not start this section with another moment like the one that starred the 73-year-old actress Youn Yuh-jung. This one contributed a funny moment through her funny speech at the moment she collected the award for Best Supporting Actress. It became one of the moments of the night since, the person in charge of delivering the award was Brad Bitt, and in verbatim words, Youn Yuh-jung said: “Oh, Mr. Brad Pitt, I finally know you. Where were you when we were shooting?

The most emotional moment

Thomas Vinterberg was in charge of starring in the most emotional moment of the ceremony. This occurred when the filmmaker collected the Oscar for the best international film. The speeches this year were really emotional, even so, Vinterberg’s was the most moving since it remembered his 19-year-old daughter who died in a car accident. His film, Druk, is a story that celebrates life and is undoubtedly a monument to his daughter.

The most vindictive moment

As we have mentioned, the 2021 Oscars gala was marked again due to health measures and Covid-19. Despite this and thanks to all the protocols, the Oscars ceremony has been unmarked from the last celebrations that we have seen such as the Golden Globes Awards or other events. characterized by being atypical finery, where the familiarity and comfort of the famous in their homes predominated. We can say then that the Oscars gala has been the only one that, despite the measures against Covid-19, has been able to gather all the Hollywood stars in the same space through a red carpet and participating as public. To guarantee that all the necessary protocols were met, all attendees had to undergo a previous PCR, in addition, they had to wear the masks whenever they were not live and above all, maintain social distance whenever possible. In addition, they also changed the place for a larger and safer one. In this way, instead of being held at the Dolby Theater, it was held at Los Angeles’s Union Station. For all those attendees who could not travel, different Oscars venues were installed in other parts of the world such as London, Paris, or Sydney. The goal was to avoid Zoom video calls and to keep everything as normal as possible.
Share on facebook
Share on twitter
Share on pinterest
Share on email