We have great news for Super Mario Bros lovers! Last February, Nintendo presented the next character that will be part of the world of Super Smash Bros. Ultimate: a blend between Pyra and Mithra. If you still do not know her, we invite you to continue reading this article as we will comment on the most important characteristics of this new character.

What is Super Smash Bros. Ultimate?

Pyra and Mythra: the new character

As we mentioned previously, last February, Nintendo held a virtual event called Nintendo Direct in which presented the most important novelties of video games. Among other important news, they highlighted the incorporation of a new character which players most fans of Xenoblade Chronicles 2 would especially like. In this way, from March 5, all players are able to enjoy the new character: Pyra and Mythra from Xenoblade Chronicles 2. Pyra now is an alternate identity created for Mythra and therefore, both custom characters have become a single character for this game in the series. In this way, players who decide to fight with Pyra and Mythra will be able to alternate between one and the other during combat to have the most characteristic movements of each one. 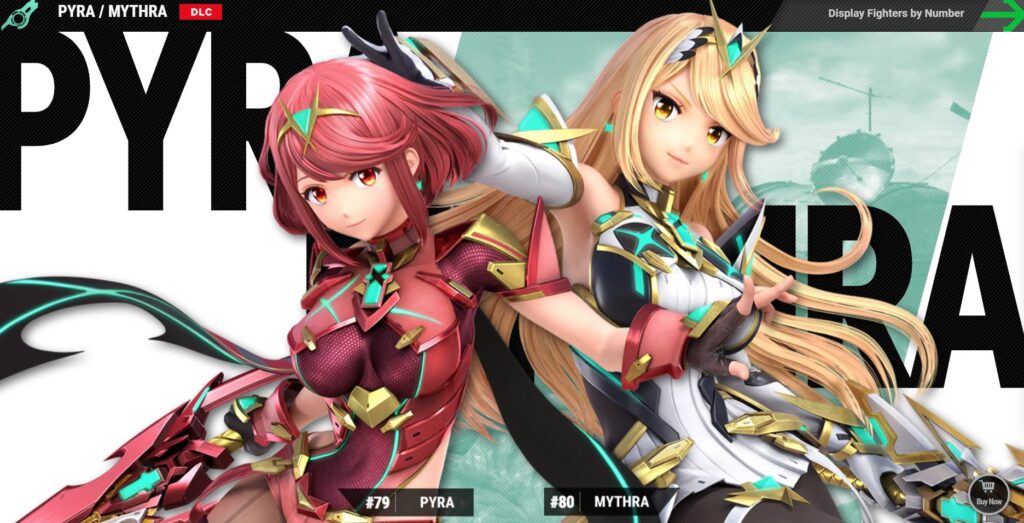 Characteristics of Pyra and Mythra

Pyra and Mythra will become a single character despite being two characters with their own characteristics, attributes, and attacks. Before commenting on some of the most outstanding characteristics, it is necessary to mention that Pyra and Mythra are two swordswomen and that therefore, their attacks have a great range and show great tactical definition in their combat. Another very important common characteristic is that both compete with the Back of the Aegis and therefore, their blows are very similar. Despite having great similarities, it is also necessary to comment that individually they have great characteristics. Pyra is characterized by using the element of fire, she is a fire emblem character, so normally, her attacks have a great range and a lot of power. Thanks to her main element, all her attacks are engulfed in flames. On the other hand, Mythra uses the element of light in all her combats, Lightning Buster is her special move. Her smash attacks are full of flashes and are characterized by her great speed and high jumping ability. We can also find some differences in the smash since Pyra performs a lateral smash with power and a perfect launching capacity. Thanks to this, she is able to eliminate an opponent very quickly. On the other hand, Mythra uses an upward smash and has more range. In addition, it also allows for more strokes and mobility.

What are Pyra and Mythra's best moves?

To end this article we want to comment on the best movements of the two personalities that are part of the new character.

Pyra is characterized by being a much more offensive character, so her movements are designed to cause great damage. Despite this, her blows have so much impact that they can leave her exposed in the event she fails to move. Pyra stands out for making movements in what is surrounded by fire to perform an offensive tactic again. In this one, you can perform different movements, turns, and intensities. As we have mentioned, Pyra stands out for using fire in her movements and therefore, it is always present in all her attacks. In this way, players will be able to launch fireballs adjusting the needs and characteristics.

Mythra, on the other hand, stands out for being a very versatile fighter capable of standing out and surprising in many different scenarios. Her movements are usually much faster and easier, although the damage dealt is considered to be less than Pyra’s. In addition, it is important to mention that Mythra’s movements also stand out for always incorporating an element of light, which allows to achieve a greater range and increase the number of blows, depending on the impact that you want to make on the opponent. The element of light also allows you to confuse the enemies and to be more powerful in the next blows. So, what are you waiting for to play with this new character and try her different features?