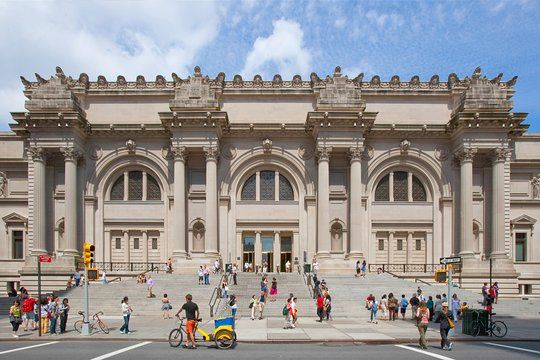 If we recently talked about the famous Moco Museum, today we want to refer to the NY Metropolitan Museum of Art. If you like art, stay, because you will want to go to NY right away!

The Metropolitan Museum of Art presents the best of art history from around the world and attracts nearly 6 million visitors of all ages annually. But what is it that makes it so popular? What is the magic of the MET?

This museum, inaugurated in February 1872 and located on Manhattan’s Upper East Side, is one of the most prestigious cultural centers in the world and a must-see in New York. It’s estimated that the Metropolitan Museum received more than 7 million visitors in 2016, making it the most visited museum in the United States and the fourth most visited museum worldwide.

The Metropolitan Museum has a floor space of approximately 190,000 square meters, spread mainly over three floors. As proof of the enormous size of this museum, it’s worth mentioning that it houses in its interior pieces such as a life-size Egyptian temple or the reconstruction of a large American mansion.

How to get to the MET in New York

You will find the main entrance of the Metropolitan Museum at number 1000 of the famous Fifth Avenue in New York, on the east bank of Central Park. For this reason, we always recommend combining a visit to the museum with a nice walk through the most famous park in the world.

Generally, the best way to get here by public transportation is to take the subway to the 86th Street station.

Although it’s difficult to say exactly, it’s estimated that the Met’s exhibition currently has more than two million pieces from all over the world, including Western art (especially great representations of American history), as well as interesting samples from Egypt, Africa, the Middle East, Asia and Oceania!

In short, a complete and exciting walk through the history of mankind without leaving the Big Apple. A visit to the Metropolitan Museum offers a journey through 5,000 years of exciting cultures and civilizations that no one should miss. To give you an idea, among the most outstanding works that you’ll find throughout the 19 departments of the MET are the following:

In addition to the permanent exhibitions, this museum always offers traveling exhibitions of first level.

The rooftop of the Metropolitan Museum

If you’re lucky and the weather is on your side, one of the areas of the Metropolitan Museum that you can’t miss is its rooftop. Unfortunately, this area of the museum is only open during the warmer months of the year, but it offers the opportunity to relax and have a drink with the best views of Central Park. This sort of sculpture garden is located on the fifth floor of the MET and is easily accessible via the elevators that you will find in the “European Sculpture and Decorative Arts” gallery.

Tickets to the Metropolitan Museum of Art in New York City

The official entrance fee to the MET is $25 for adults, $12 for students and $17 for seniors. Children under 12 years old are free.

If you want to save on museum admission, tourist passes are currently the best option. If you have a New York Pass, a City Pass, an Explorer Pass or a Sightseeing Pass you can visit the museum for free and without waiting in line at the ticket office.

What are MoMA’s opening hours?

How much visiting time should you plan?

Considering that the Met in NYC is one of the largest museums in the world (it ranks in the top 5), you’re hardly going to see it well in a morning or afternoon. Rather, it’s a museum where you could even spend a whole day in just one of its parts, such as the American art part.

Our recommendation is that you take a look at the floor plan of the Metropolitan Museum as soon as you arrive to decide what you want to see. After all, that’s what the division into thematic areas is for: for people to choose what they want to see!