STAR WARS GAMES: LIST OF THE BEST VIDEO GAMES OF THE SAGA

The Star Wars saga is probably one of the sagas with most followers in the world and it has become a cultural phenomenon. It began as a science fiction film in the seventies and over the years it has become a whole film saga that continues to enchant many people from all over the world today.

As a result of the great success of the saga, more and more merchandising products began to be created, and with the rise of technology, they were adapted to new formats and products. In 1983, the first Star Wars video game was created and since then, these video games have allowed players, and fans, to go further.

Are you a Star Wars fan? Keep reading if you want to know the best video games of your favorite saga and live the same adventures as your heroes, Han Solo, Luke Skywalker, and all the Star Wars characters.

Next, we will discuss the best Star Wars universe video games:

Star Wars Knights of the Old Republic I and II

The next game is Rogue Squadron II: Rogue Leader and for many, it is also one of the best games in the entire saga due to the wide variety of missions that players can find in this video game. All these missions are specialized in the battles of special ships.

Star Wars: Battlefront II is another of the great games of the entire saga, and it has probably become one of the games that consumers have liked the most. This is because the new version of the game included many new features with new classes, weapons, movements, and vehicles.

This game stood out above all on consoles such as Nintendo 64, Dreamcast, or arcade machines, and, in its time, it was a big success due to the high quality of the video game. Despite this, no more versions of this game were made over the years.

This is one of the classic role-playing video games, and it really stands out above all for including a massively online multiplayer game that connects players, from all over the world, through the same story.

We want to highlight the following game, Star Wars: Empire At War because despite going unnoticed and being little valued by fans, it is one of the games with the highest quality of all. Also, it is a real-time strategy videogame where the player faces strategy battles with all kinds of units, soldiers, and scenarios.

Star Wars: The Power of the Force

This is a new adventure game where players can enjoy several episodes, in which they use the force powers. Throughout the game, players will control the main character Starkiller, who will discover the truth about his past.

The third episode of Rogue Squadron was the last and also the most complete. It was released for the GameCube and the game had great graphics considering the time it was made. If you missed our post about the best GameCube games, here you can check it out!

Rogue Squadron was one of the biggest licenses in the Star Wars saga and was focused on action, lightsabers, battles, and fantasy worlds adapted to the Nintendo 64.

The last Star Wars video game we want to comment on is adapted to the world of LEGO in video games, and it is a faithful recreation and is perfect for fans of the saga of all ages. The objective is to collect the gold bricks scattered throughout the game, with levels that go through all the films in the saga.

The first Star Wars video game and the upcoming ones

The first Star Wars video game was made in 1983 and since then, a total of 123 games have been created for all possible consoles. In this way, the first game that was created was Star Wars: Rebel Assault I + II, an action game where space combat is done in the first person since the attack on the Death Star is simulated. 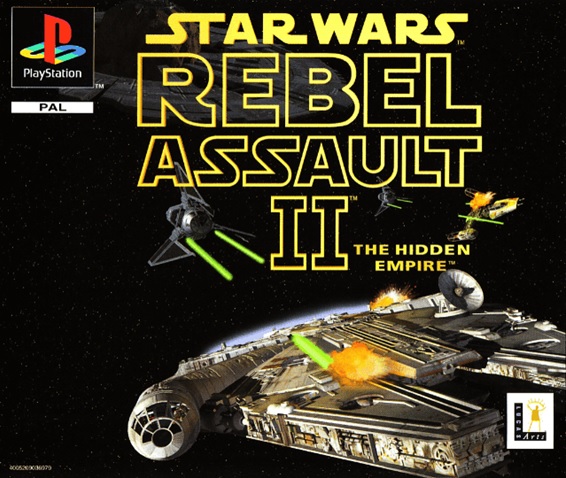 Next, we want to comment on the best-selling video games of the Star Wars saga, until the last year 2019. Many of those that we will comment on below we have previously discussed in the top of the best Star Wars video games.

Finally, we want to comment on the worst Star Wars video games because even though they have had great successes, it is also important to comment that not all their games have had the expected success.

This was not one of the best Star Wars Kinect proposals, although it was a good idea since the character was controlled through the gestures made in front of the TV. But the execution of the game was not so much and that is why it did not have the expected success.

Star Wars: Obi-Wan was one of the first games to be made for Xbox and the game’s production failed again since despite having a good storyline, it had neither good graphics nor good development.

Yoda Stories was a video game through which the creators wanted to give a new approach to the saga and add elements of strategy in its development. Although the intention was correct, the development was not, and it could be considered one of the worst.