ED AND LORRAINE WARREN MUSEUM: WHY IS IT PERMANENTLY CLOSED? 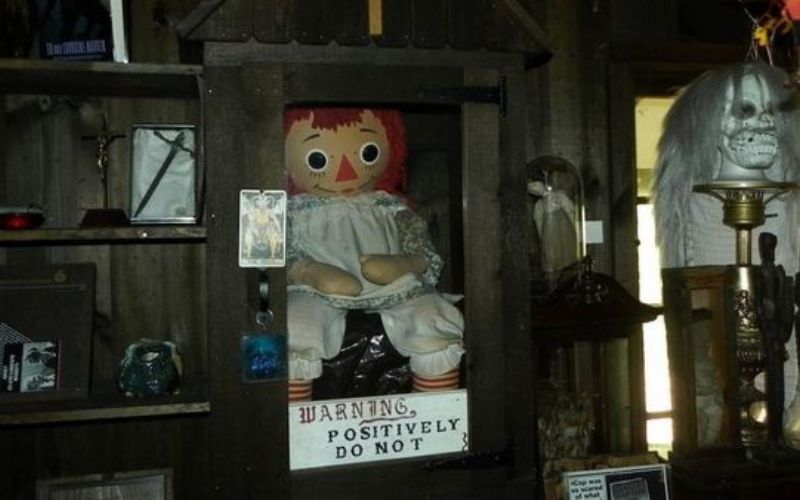 Horror films have given us countless stories based on real events. Thanks to The Conjuring saga, director James Wan made the Warren couple known to the whole world. From the success of their first film back in 2013, a wide shared cinematic universe was created, which would include works such as Annabelle, The Enfield Affair, or the nefarious The Nun.

Although by now many people are familiar with Ed and Lorraine Warren, what not everyone knows is that there are a wide variety of (supposedly) cursed objects that are closely related to these films. Ed and Lorraine Warren used to collect things related to the mysterious cases that they investigated. Something that, despite being quite disturbing, has attracted the attention of lovers of horror films and the world of mystery!

Who were Ed and Lorraine Warren?

Ed and Lorraine Warren were two famous paranormal investigators who were part of some of the most talked about cases in American history.

The Warren couple were at 112 Ocean Avenue in Amityville (known to many as the most famous haunted house in history). They also investigated the events surrounding the real Annabelle doll in the 1970s, closely studied the alleged Enfield poltergeist, and were even part of the trial of Arne Cheyenne Johnson, who claimed that the devil himself forced him to murder his wife.

These are just some of the events that were studied by Ed and Lorraine Warren. But the truth is that the couple was present in hundreds of paranormal cases.

Why is the Museum of the Occult permanently closed?

The museum was closed at the end of last year due to an infringement, so the Annabelle doll is no longer on display! The doll that inspired the film is now in possession of Edward and Lorraine Warrens’s son-in-law, Tony Spera.

Ed and Lorraine Warren on film

If we talk about the cast of The Conjuring, on the big screen it was Vera Farmiga and Patrick Wilson who gave life to this peculiar marriage. We have seen them appear in several films of the already well-known Warren Universe.

However, today, the films in which they have the most prominence are The Conjuring and The Conjuring 2. In the first one, the Warren couple will investigate the case of the Perron family, not as well known as the Enfield Case, which is the main plot of the second installment of the franchise.

The third installment of The Conjuring focuses on the real-life case of Arne Cheyenne Johnson. After being accused of murder, at his trial he claimed to be demon-possessed during the events.

What was in the Warren Museum of the Occult?

After they investigated various paranormal activity cases, the Warrens often took souvenirs from the places where the events took place.

Bathsheba Sherman is remembered in history as one of the evilest witches who ever walked the Earth. Among the abominable acts, she committed during her lifetime was the cold-blooded murder of her children as an offering to Satan himself.

As the story goes, Bathsheba Sherman took her own life by hanging herself after cursing the house in which she lived.

What horror movie lover doesn’t know the Annabelle doll by now, that there are even Funko Pops of her? The truth is that the real doll is not as scary as the one we saw in the films. Even so, the doll’s supposed ways of manifesting itself are still terrifying.

The original owner of the rag doll claimed that it moved on its own and that it harbored very dark and demonic energies inside. It should come as no surprise that the Annabel doll was the main attraction at the Warren Museum.

The cursed mirror of Myrtles Plantation

According to rumor, Myrtles Plantation is a place full of ghosts. Like Amytiville, it is considered one of the most famous haunted places in the United States. Some claim that there are more than a dozen souls in torment, roaming the place incessantly.

Before becoming a plantation, the site was an ancient Indian burial ground. This is believed to be the main cause of the alleged paranormal occurrences.

It was during the 1980s that a hall mirror arrived at the house. To look at it, one might think that it is an ordinary mirror. However, guests claim that all sorts of strange figures were reflected in it and that, from time to time, children’s handprints were imprinted on the glass itself.

Other cursed objects from the Warren Museum

In addition to those already mentioned, Warren’s occult museum housed all sorts of extraordinary objects. Among them, is another doll as creepy as Annabelle: the Shadow Doll. All of its owners claim that when the toy was near them, they kept having nightmares so terrifying that they were likely to die of cardiac arrest.

There was also a piano that was said to be able to play without anyone playing it. There are also demonic masks that were used in satanic rituals, the wedding dress of the late Anna Baker, and even a sinister horned figure that was used in various rituals.

Were you familiar with these objects and stories? Would you dare to come close to a haunted doll or mask used to conjure the devil? 😱