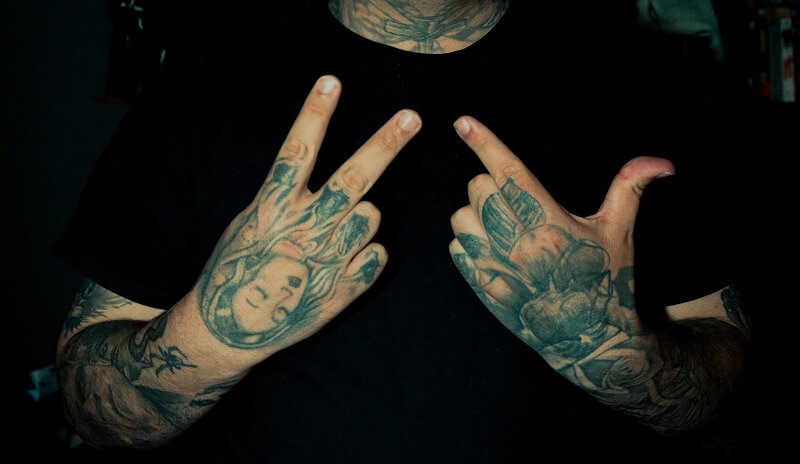 We recently told you all about Thai tattoos and their meanings, in this post we will discover the tattoos of the Mara Salvatrucha, don’t you know who they are?

The Mara Salvatrucha gang, colloquially and infamously known as MS-13, is a ruthless and barbaric street gang. Those who are part of the MS-13 gang murder, terrorize, rape, and maim in 40 states across the U.S. The stories of their terrible crimes are legendary.

They are truths that no one disputes. Mara’s best-known motto is “kill, rape, control”.

Who are the Mara Salvatrucha?

Many recognize the name Mara Salvatrucha, or MS13, as one of the most feared and notorious criminal organizations in the West. Although it has its origins in the poor, refugee-laden neighborhoods of Los Angeles in the 1980s, gang life’s reach now extends from Central America to Europe.

Its activities have built up the Northern Triangle – Guatemala, El Salvador, and Honduras. In October 2012, the US Treasury Department labeled the group a “transnational criminal organization”, the first such designation for a US street gang.

The MS13 was founded in the poor and marginalized neighborhoods of Los Angeles in the 1980s. As a result of the civil wars raging in El Salvador, Guatemala, and Nicaragua, refugees flooded north. Many of them ended up in California, living among the largely Mexican neighborhoods of East and Downtown Los Angeles, as well as in the San Fernando Valley.

While Mexican gangs reigned in the local underworld, war-hardened immigrants quickly organized themselves into competing groups, the strongest of which was called the Mara Salvatrucha Stoners or MSS.

The origin of the name is still disputed, but “mara” is a Central American term for the gang. “Salva” refers to El Salvador. “Trucha” is a slang term meaning “smart” or “clever”.

Salvatruchas was also the name given to the locals who fought against William Walker, an ambitious businessman and pro-slavery advocate from the United States who attempted to subdue parts of Central America with a small army in the 1850s. Walker, after a brief stint as self-proclaimed president of Nicaragua, was run down and executed by local Hondurans.

One of the most popular criminal gangs

MS-13 reportedly spans 46 states and has an estimated 50,000 members worldwide. There are groups from California to Long Island, and MS-13 crimes have even occurred in Canada. Tens of thousands of members are in Central America, with high concentrations in Guatemala and Honduras.

Outside the traditional bases in the United States and Central America, MS-13 has also expanded into Mexico. The gang moved across the Guatemalan border into the southern Mexican state of Chiapas and became involved in human smuggling, working with people hoping to sneak through Mexico on their way from Central America to the United States.

MS-13’s involvement in human trafficking led to partnerships with organizations such as Los Zetas, Mexico’s most notorious drug cartel.

The Mara Salvatrucha: their tattoos 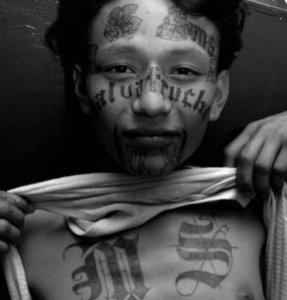 Many MS-13 members are covered in tattoos. It isn’t only to intimidate, but also to show their loyalty to the group. Many of the meanings of the tattoos are related to the gang’s culture and history and to the crimes its members have committed.

Mara’s tattoos tell a story, and the number 13 has a meaning. There is a lot of symbolism mixed in and the number 13 is very important, it all adds up to 13. If you ask them about their tattoos, they’ll show you how 13 matches everything, it is the magic number for them.

Sometimes members also have the numbers six and seven tattooed on their body, which adds up to 13.

🤩Do you love to find out more about tattoos? Discover Tribal Tattoos!

MS-13 tattoos also have a lot of religious symbolism, a mixture of Christian and satanic imagery representing the struggle between good and evil itself.

One of the most common tattoos among the Maras is hands joined in prayer, this tattoo represents the following phrase “forgive me, my mother, for my crazy life”. For them, this tattoo signifies their repentance and acceptance of all the violent acts they have committed, although this recognition does not mean that they are going to stop this violent life.

The Virgin of Guadalupe

The Virgin of Guadalupe is very famous not only among Mexicans and the Mara Slavatruchas who pray to her and her higher power for protection. Their tattoo represents their devotion to the Virgin.

All tattoos bearing the face or allusion to Jesus Christ are very popular among the MS-13, as well as the Virgin, many entrust themselves to Jesus Christ. 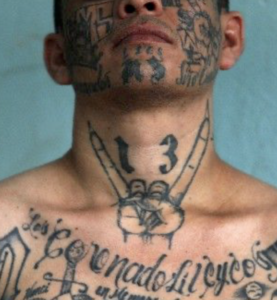 The tattoos that become the most tattooed and most common among members are the following:

These tattoos are the most notorious and most recognizable among Mara members, tears are tattooed on the face below the eye where a tear would fall, and represent the deaths, either of friends or family members that they have had to kill.

“M” on the right shoulder and a stylized “S” indicate MS membership of the El Salvador gang,

The devil’s horns are a symbol adopted by MS-13 gang members.

Also, the three dots are predominantly found on gang members.