We recently talked about tribal tattoos and as we saw that you loved it, today we have to talk about another type of tattoo: Thai tattoos! Stick around because after this post you will already have the idea for your next tattoo!!! 😉

Traditional Thai tattoos are known as “Sak Yant” in Thai, which basically refers to the fact that they are of the “bamboo” variety, and usually have some spiritual, religious or magical significance or other sacred meaning to the wearer.

Sak in Thai translates as a tattoo, and Yant comes from the Sanskrit word Yantra, which is a form of mystical diagram or image originally used for meditation purposes. These yantras have their origin in what is often referred to as “dharmic” religions arising from some regions of India, such as Hinduism, Buddhism, Jainism, and Sikhism.

The actual art or practice of Sak Yant is ancient and was apparently part of the culture of the tribes of southwestern China and northwestern Vietnam more than 2,000 years ago. This ancient art gradually moved southward to Indonesia and the Philippines, although today it’s found mainly in Thailand and its neighboring countries, Cambodia, Laos and Myanmar (all of which, it should be added, were part of the ancient Khmer Empire, which was large in all the components contained in a Sak Yant). 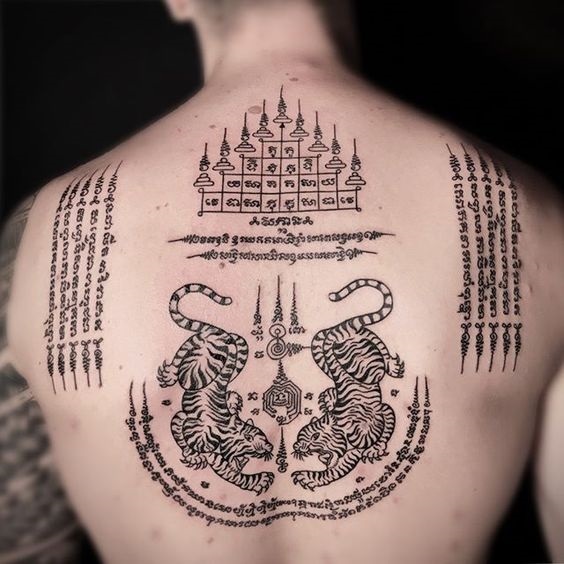 The designs have become popular among tattoo fans around the world in the last two decades, due in large part to certain celebrities who have traveled to Asia to get them done, and (unfortunately, according to some) the designs have become “standard” for many first-time “tattooed” people, or for those who are going on vacation in Thailand.

But it’s important to point out that traditionally, the sak yant tattoo should be performed by Buddhist monks in temples as they pronounce rituals and mantras while tattooing with the bamboo technique. For this reason, although we see many people with Thai tattoos around us, it’s very likely that they haven’t gone to a monk or temple to get it done, so in the eyes of a Thai, this tattoo isn’t blessed and won’t really protect you.

👉 Learn all about the dotwork tattoo style, techniques and examples!

Thai tattoo designs or sak yant are usually composed of some kind of sacred, geometric, animal, or Buddhist-related image, along with lines of Sanskrit phrases that grant the wearer of the tattoo various benefits such as protection from evil spirits, fortune or power.

In fact, there are three different components to a traditional Sak Yant tattoo: the yantra, the text, and an associated mantra.

Let’s take a look at some of the most revered or popular sacred bamboo tattoos along with their meanings!!! 😉

Let’s get this out of the way: yes, it’s the one Angelina Jolie wears on her back, which is why it has become one of the images some people tend to associate with Sak Yant designs.

The name “Hah Taew” basically translates to “5 lines”, which is what this design has. The spiritual theme relates to all aspects of a person’s life, and each line represents a different aspect.

In detail, the first line is meant to prevent any kind of unjustified punishment and invites the cleansing of unwanted spirits, while protecting the wearer’s place of residence. The second line protects against the constellations of the horoscope that may bring bad luck. The third line protects against black magic and helps prevent possible curses. The fourth line serves to attract good luck and success in the future, while the fifth helps to increase the power of charismatic attraction.

Would you do it to yourself? 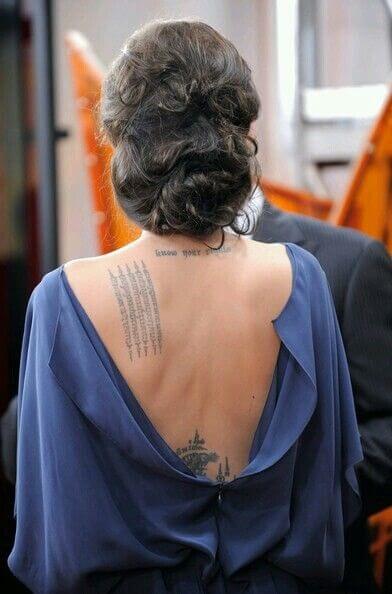 Suea means tiger in Thai, so this is the tiger tattoo. It’s very common in many of the designs worn by Thais, and in particular, those engaged in dangerous occupations, Muay Thai fighters being one of the best examples.

For many Thais, the tiger represents strength, power, protection, conviction and authority, and is obviously also considered a very “masculine” tattoo. It should be noted that tattooing on women, of any design and even more so the yant tattoo, is a very recent phenomenon in Thailand, and in Asia in general. Normally it was a practice reserved for men but that is slowly changing, and how happy we are about it! 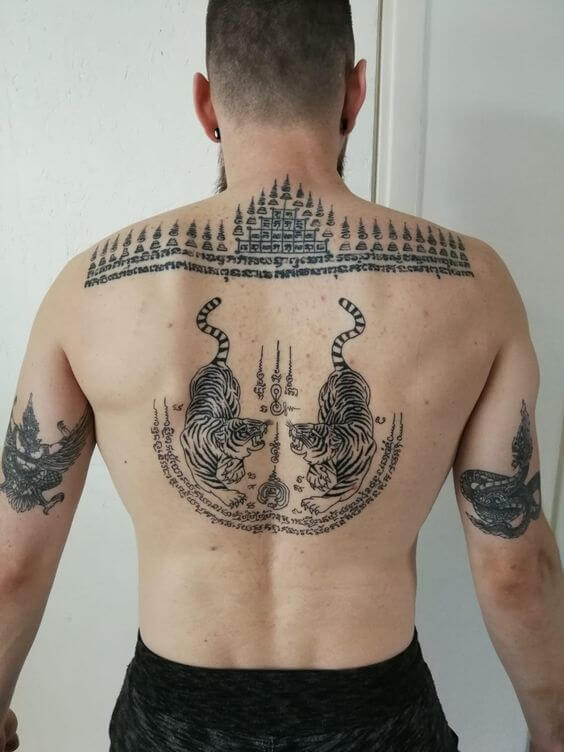 The Paed Tidt translates as “Eight directions”. This design incorporates weight representations of Buddha, which appear as groups of 3 ovals, decreasing in size from bottom to top. The main benefit believed to be derived from wearing the Paed Tidt is that it will provide protection against any evil or adverse spirits, in whatever direction one travels. 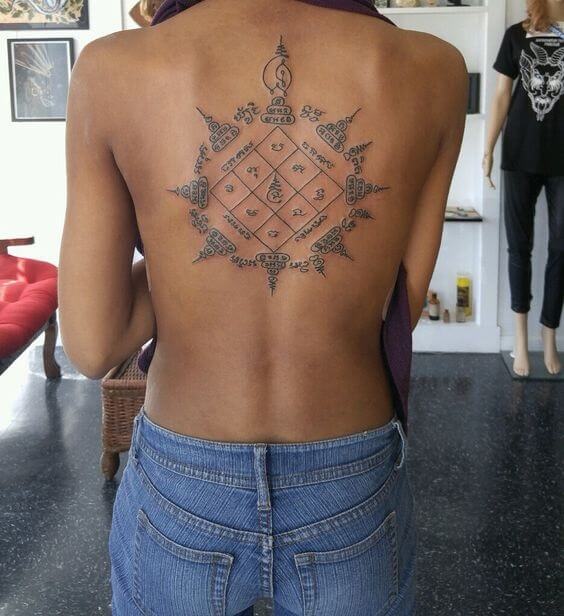 Gao Yord translates as “9 needles”, “peaks” or “summits”, and obviously refers to the 9 peaks of the design. Some branches of Buddhism attribute importance or special significance to the number 9, and it’s also believed that this design represents 9 different buddhas, each of which holds specific sacred powers.

Therefore, the Gao Yord is believed to be a very powerful Thai tattoo that confers a wide range of protection and other benefits to the recipient. 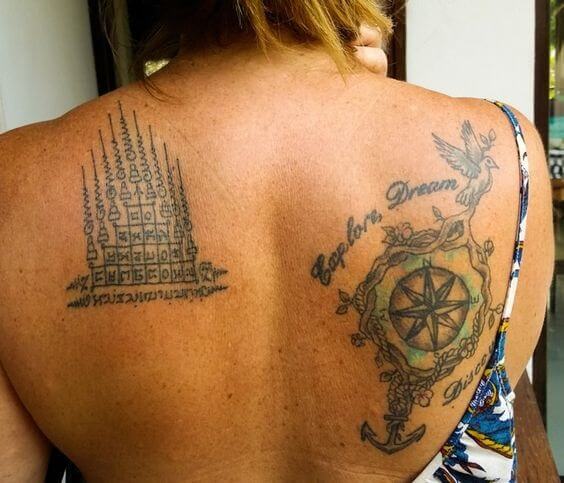 Do you like these tattoos? Would you choose a Thai Tattoo for you?