EAST SIDE GALLERY BERLIN: THE MOST FAMOUS KISS

Berlin is one of those cities that captivates and conquers you because, in it, you can find art, culture, history, and personality. Even if you have never visited the city, it is very likely that you have seen, on numerous occasions, the most famous kiss portrait found in the East Side Gallery, as it has undoubtedly become one of the most important points of the city.

For all those people who have never seen it and do not know what the story behind the famous kiss is, we will comment on this post on the origin of this kiss and the artist who immortalized this portrait.

What is the East Side Gallery?

Just as you have surely seen the portrait of this kiss, you surely also know what the East Side Gallery is. Even so, we want to briefly comment on what one of the most important monuments in the city of Berlin consists of.

As everyone knows, Berlin is a city with a great history and it is precisely what is reflected through the East Side Gallery since it is the largest section of the Berlin Wall that is preserved today.

We could say that the East Side Gallery is a museum or an open-air art gallery where numerous artists from all over the world have exhibited their art on the wall. Throughout 1.3 kilometers, along the river Spree, 118 artists from 21 countries reflected the feeling of freedom and use their talent to express the protests they lived. They used this part of the Wall as a message to remember such an important moment as the one experienced by the city of Berlin and the whole world.

What is the story behind this famous kiss?

Undoubtedly one of the murals that stands out the most throughout the entire East Side Gallery is the representation of a kiss between two men. This work is popularly known as “The Kiss” and although it surprises many people, it was a kiss that really happened. Over the years, it has undoubtedly become one of the most remembered kisses in history.

Over the years, history has referred to this act as the socialist fraternal kiss and it occurred in 1979 on the occasion of the 30th anniversary of the German Democratic Republic (GDR). The protagonists of this kiss were Leonid Brezhnev, the Soviet leader, and Erich Honecker, the president of the GDR.

The act of kissing was not a coincidence but a tradition of the socialist states. In this way, through this, what the two leaders wanted was to create a kind of ritual with which the two representatives of the states sealed their alliance and their agreements to guarantee order through the military authorities. 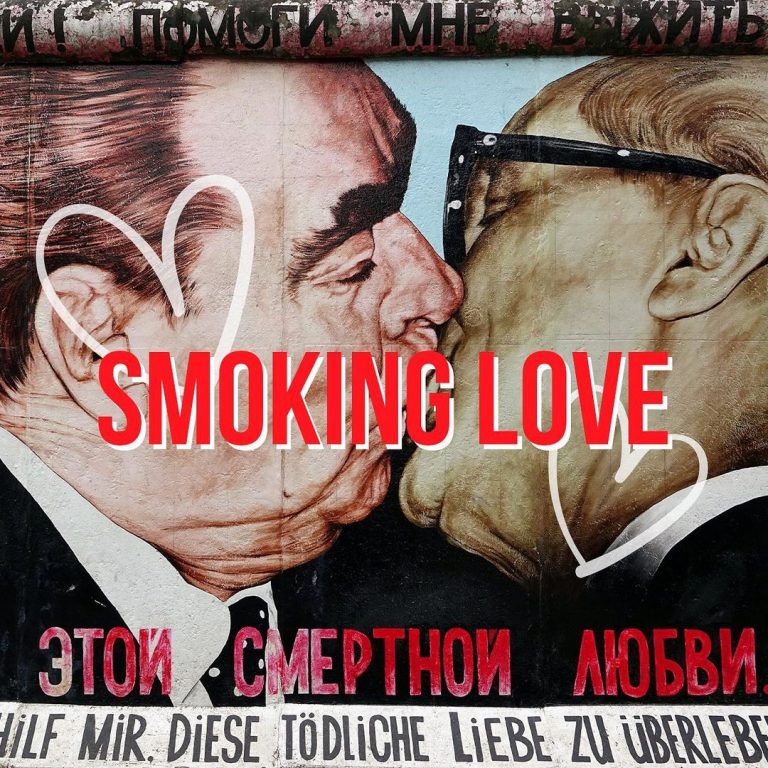 Who is the artist who painted the famous kiss?

Although it has become one of the best-known murals over the years, probably not everyone knows who the artist of this great portrait was.

Specifically, the artist who made this work was the Russian painter Dimitri Vrubel. It was painted by the artist in 1990, two years after the fall of the wall. And in addition to standing out for the scene and the great representation it makes of the two characters, it also stands out for the ironic phrase that frames the mural: “My God, help me to survive this deadly love“.

Although at the time the scene did not symbolize freedom but rather the opposite, over the years, this kiss has become a great symbol to represent the end of the wall.

How did the idea of ​​painting “The Kiss” come about?

If the representation of this moment was already a curious aspect, the origin and the way in which the idea arose is even more curious.

Although the artist was Dimitri Vrubel, he was unaware of the existence of the photograph taken by the photographer Regis Bossu and which reflected the kiss between Brezhnev and Honecker. The reason why Vrubel decided to reflect on this scene was that a Scottish girl he met in Paris taught him photography and a poet friend of his invited him to paint it on the wall. After asking and to the surprise of many, Dimitri Vrubel was able to reflect this moment on the Berlin Wall.

RETRO CAMERA: PHOTOGRAPHY OF THE PAST IS BACK

Nostalgia is increasingly taking over us, it is common to see homages to the past in different aspects of the modern world, such as fashion runways, TV shows, music, and even interior design. So, it’s no wonder that this retro fashion that takes us back to yesterday manifests itself in the photography we see on […]

K-Pop is one of the most popular music genres of the moment. This new popular genre refers to South Korean pop and is a musical phenomenon that has been sweeping Asia since 2017, but since it does so internationally among young people from Latin America and Europe reaching all parts of the world.  The success […]

Recently, we talked about non-binary gender and how this had become one of the most important terms in recent months for many people since thanks to it they have been able to feel identified with themselves. Non-binary people have put on the table another very interesting debate about non-binary pronouns since they have expressed the […]

FIND OUT THE ULTIMATE SUSTAINABILITY TRENDS IN THE FASHION INDUSTRY!

The new iPhone 14 is giving something to talk about, not only because of its features but also because of the new version division. It brings more than one question about Apple’s true proposal for 2022. Is it a real improvement in the terminals or will it be a simple commercial strategy? New iPhone 14: […]

MALDIVES ISLANDS OR CARIBBEAN: IT´S UP TO YOU!

Do you remember when we talked about Railay beach in Thailand? Today we want to help you in deciding your vacation. We all know that the Maldives and the Caribbean are very good choices, but which one is better? We help you decide! The best time to visit the Maldives off the Caribbean You wouldn’t […]

You know we love festivals, but does the name Woodstock ring a bell? Yes, it’s a New York location, but it was also a festival that became one of the most iconic moments in contemporary culture. Let us explain why this wonderful festival was also a chaotic experience! The Woodstock Festival: reasons for its chaotic […]

ALL ABOUT PEAKY BLINDERS NEW SEASON: ¿WILL IT BE THE LAST?

WHAT IS A NON-BINARY PERSON? A NEW WAY TO BE FREE

Surely in recent months, you have heard the expression of non-binary gender, as this has become the concept with which many people have finally been able to feel identified. Gender identity, how we feel, and how we show ourselves to society… are issues that for many can be difficult to understand. For this reason, we […]

GREAT VIDEO GAME MUSIC TO LEVEL UP YOUR DAY

Music is another artistic expression that is not only part of our daily lives but is also present in many other aspects and products that we frequently consume. The world of videogames has always stood out above others and is that currently when we play video games, visual graphics and music have become two essential […]

DO YOU KNOW ALL THE GRAFFITI STYLES? DISCOVER THEM!

Do you remember the most popular walls in Chicago? Surely you saw that they had quite a few differences between them, it all depends on the message wanted to give and the author, but have you ever thought about the types of graffiti that exist? We explain it to you! 😉 What is Graffiti? Graffiti […]

If we recently talked about the best lakes to visit in Germany, today we want to refer to the longest lakes in Europe that will take your breath away. Are you trying to make the most of your vacation? We will help you! 😉 The best European lakes where to get lost this summer Lake […]

IS SEXTING CHEATING IF YOU ARE IN A RELATIONSHIP? LET ‘S FIND OUT!

And after talking so much about polyamory, today we want to refer to a concept that is much talked about: sexting. Surely you know what it is, since the word says it by itself, but is it an act of infidelity? Let’s take a look 😉.  What is sexting? The term sexting is a combination […]