BEST PLACES TO VISIT IN MOROCCO THAT YOU CAN’T MISS! 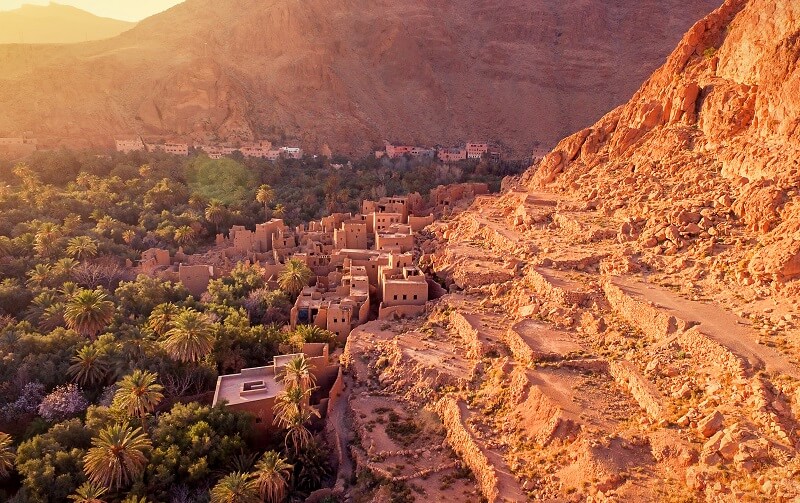 Have you already decided to travel to Morocco this year? Great! You’ve made the right decision because now it’s time to plan your trip 😉. There is so much to see and experience in Morocco: the variety of landscapes, from coastlines and snow-capped mountains to arid deserts, is a true wonder. So today we’re going to help you plan your next holiday.

Marrakech – the ‘Red City’ of Morocco

Marrakech is the most popular city among tourists and not for nothing. The city is an important cultural and religious center and is a great expression of the Moroccan way of life.

The Medina of Marrakech, a World Heritage Site since 1985, impresses all passers-by with its stunning red-walled architecture. Hence Marrakech’s nickname as the “Red City” of Morocco. The city is home to some of Morocco’s most valuable architectural treasures. From mosques adorned with mosaics to palaces and sophisticated gardens, Marrakech is the place that preserves Moroccan authenticity and tradition. Therefore, Marrakech should be your number 1 place to visit in Morocco!

Here are some of the things worth visiting if you go to Marrakech:

Fez is one of the four imperial cities of Morocco, being the oldest! Its great history begins in the 8th century and over time it became an important cultural and educational center.

Few people know that Fez is the city where the oldest university in the world still operates. That is the Al Quaraouiyine University which was founded in 859. In Fez, there are numerous mosques, madrassas (educational institutions), funduqs (traditional hotels), and hammams (Turkish baths) that have extremely beautiful architecture. The city is also famous for its traditional tanneries where leather dyeing methods have not changed since medieval times.

These are some of the things you have to visit if you go to Fez:

Rabat – the capital of Morocco

Rabat has been the capital of Morocco since the country proclaimed its independence in 1955. Rabat has always played a more administrative role, being the main seat of all embassies.

The city is well known for the unique carpets and blankets that are woven locally, being the main center of the textile industry. It is also the main center of the food processing industry, especially fish and fruits. Thus, thanks to its fresh and tasty food, Rabat plays a fundamental role in Moroccan gastronomic culture.

One of Rabat’s main attractions is the Hassan Tower, a 12th-century mosque minaret that was designed to be the largest in the world, but its construction has been halted.

Here are some of the things you must visit if you go to Rabat:

Casablanca is Morocco’s largest city and most important economic center. It’s a striking contrast between modernity and antiquity. The city is a product of local Berber culture and Western influences such as Spanish, Portuguese and French. Did you know that Casablanca is home to the world’s tallest mosque and minaret? That’s right, and it is the beautiful Hassan II Mosque which is a true symbol of the city and the whole country. This beautiful mosque has stunning architecture made by the best craftsmen!

These are its places of interest:

Although Meknes is less popular with visitors to Morocco, the city is a must-see!

Meknes is one of the four imperial cities of Morocco and was the capital of Morocco in the 17th century under the rule of Sultan Moulay Ismaïl. Meknes impresses with its stunning architecture: palaces, monumental gates, defensive walls, mosques, and other amazing fortifications make every visitor stop and marvel.

If you visit Meknes, you should not miss the opportunity to take a brief tour of the great Volubilis (Roman ruins) and the charming Moulay Idriss (the site of the tomb of Idris I).

These are the places of interest:

Volubilis is the place that will take you back some 2300 years to the time when the Roman Empire ruled the kingdom of Mauritania and Volubilis was its capital.

By the 11th century, Volubilis had been abandoned. Today, only its ruins can be found, which hold so many years of great history.

Chefchaouen – the “Blue Pearl” of Morocco

Chefchaouen is the place that will add color to your trip. It’s called the “Blue Pearl” of Morocco because the Medina of the city is painted completely blue, it is beautiful!

It’s a 13th-century kasbah (fortified town) and was the main settlement for Moors and Jews fleeing Spain, whose influence can easily be felt today. There are many theories as to why the town is painted blue. Some people claim it is to keep mosquitoes away. Others say that the tradition of painting buildings blue was brought by the Sephardic Jews, symbolizing heaven and spiritual life. Either way, one thing is for sure, the city is unique.

Essaouira is one of the most beautiful coastal towns in Morocco with a unique charm and splendor. The port of Essaouira was one of the most important trading ports between Africa, Europe, and America during the 18th and 19th centuries. Today you can still admire some old ships in the port.

The city is nicknamed by some as the “Wind of Africa”, because of the strong wind that dominates it. Essaouira is a dream for kitesurfers and is a top destination, especially in spring and autumn when the wind power is perfect.
Aït Benhaddou, the Game of Thrones kasbah

Aït Ben Haddou is an 11th-century fortified village in the province of Ouarzazate that surprises with its historic architecture. Its unique style has been an inspiration for many film directors, choosing Aït Benhaddou as a location for famous films and series such as Jesus of Nazareth, The Mummy, Gladiator, and Game of Thrones set.

For Game of Thrones fans, Aït Ben Haddou is the number one destination in Morocco. It was the “city of slaves” in the 3rd season of the series.